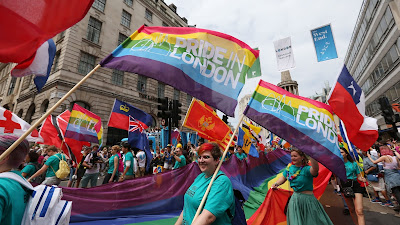 Pride in London released a new emotional short film about why Pride still matters in 2018.

The “Pride Matters” film features a group of LGBT people who face difficulties due to their sexuality or gender coming together to sing a chilling version of Somewhere Over the Rainbow.

The video begins with several painful incidents, including someone being beaten and another person who is told that “it’s just a phase” when they attempt to come out to their mother.

However, the short film then takes a more positive turn as the people turn to their loved ones and their community for support.

We see people coming out to their families, partners holding hands in the street and others proudly wearing rainbows and flags.

The video ends with a hopeful and important message, stating: “We’ve come a long way, but there’s still a way to go.”

Releasing the video, Pride in London said: “We want to reflect on why Pride is still important in 2018, whether as a protest, celebration, symbol of freedom or platform for diversity".