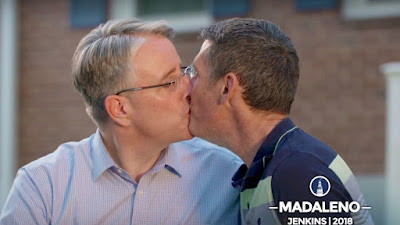 A Democratic candidate has made history by appearing in an election campaign advert believed to be the first in the US to feature a same-sex kiss. Richard Madaleno, who is running in the party primary for state governor in Maryland, kisses his husband, Mark Hodge, and then says: “Take that, Trump!”

The advert aired in the Washington area during a segment on the Fox News show Fox & Friends, which the US president, Donald Trump, is known to watch.

In the advert, Madaleno says: “I’m running for governor to deliver progressive results and to stand up to Donald Trump. Here are a few of the things that I’ve done that already infuriate him.” He goes on to list defending Planned Parenthood and supporting a ban on assault weapons, before finishing the advert with the kiss.

The video has also been posted to social media channels, with Madaleno urging supporters to share it with the hashtag #TakeThatTrump. The primary on 26 June will select the Democrat to run against incumbent Republican Larry Hogan.