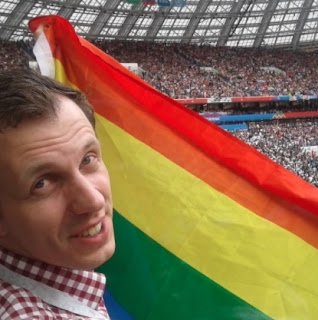 A Russian football fan gave the Russia World Cup that extra touch of colour last night as he waved a large rainbow flag every time his beloved team scored a goal.

In support of the struggling LGBT community in the country, Alexander Agapov waved a rainbow flag symbolising gay rights at the opening match of the World Cup. He is president of the Russian LGBT Sport Federation and also a big fan of his country’s soccer team.

Every time his home team of Russia scored, Agapov waved the flag, despite the potential risk to his safety if spotted by anti-gay supporters inside or outside of the stadium. ﻿

Agapov said no-one bothered him at the game for waving the flag, but said that a fan outside the stadium told him, "I don’t want that kind of world." While Agapov’s rainbow coloured support of his team passed without incident, LGBT fans could face the risk of random attacks by thugs during the tournament.

By the other hand, LGBT activist Peter Tatchell was arrested by the Russian Police on the first day of the World Cup for protesting Chechnya’s concentration camps where gay men were allegedly killed and abused for their sexual orientation.

Hours later, the team at the Peter Tatchell Foundation tweeted: “Peter Tatchell has been released. I’ve spoken to the Consulate Gen. who says he has been bailed & treated well. Thank you for the all the good wishes. Let’s remember the awful plight of LGBTs in Russian & Chechnya.”

Remember that LGBT football fans have been strongly warned to not publicly display sexuality at the Russian Football World Cup. 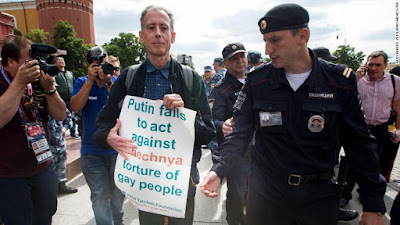