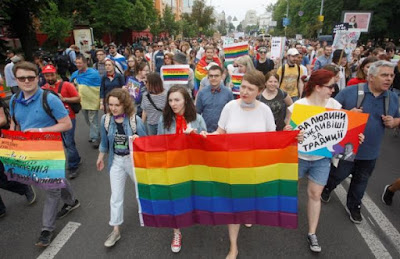 Several thousand activists pride supporters have held a march in Ukrainian capital of Kyiv, despite opponents’ attempts to block them. This year’s theme, Visibility, was selected via a poll of LGBT people and organizations.

About 3,500 were on hand for the Equality March and  took to the streets of Kyiv, whose size was estimated at 2,000 by Ukraine’s Interior Ministry and up to 5,000 by organizers.

Participants marched behind rainbow flags while others carried placards declaring messages like "Love has no gender". Although opponents tried to block the march some times, they were moved aside by police.

Kyiv held its first major pride march in 2016 after a pro-Western government that came to power sanctioned such events.

Some previous gay pride rallies in Ukraine were cancelled because authorities said they would not guarantee protection to those taking part from homophobic violence.

When the revolution succeeded in ousting Yanukovych, many gays were hopeful that Ukraine would further distance itself from Russia, where homophobia is the official state policy. But Ukraine’s activists currently face similar problems that LGBT people in Putin's Russia.

Kyiv Pride is all about public visibility. Visibility belongs equally to everyone. That’s why Kyiv Pride is such an important event; it provides a platform for the public to see and hear all of their fellow citizens. Whether gay, lesbian, bisexual, trans, intersex or anything else, it’s important for everyone to be visible.We can make Ukraine better —together!