Suprem Court rules for baker in same-sex cake case, but... 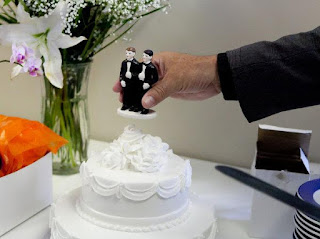 The Supreme Court today reaffirmed the core principle that businesses open to the public must be open to all in Masterpiece Cakeshop v. Colorado Civil Rights Commission.

The court did not accept arguments that would have turned back the clock on equality by making our basic civil rights protections unenforceable, but reversed this case based on concerns specific to the facts here.

The American Civil Liberties Union argued the case on behalf of Charlie Craig and David Mullins, who were refused service at a Colorado bakery because they are a same-sex couple.

In 2012, Mullins and Craig visited the Masterpiece Cakeshop to order a cake for their wedding. After the bakery turned the would-be customers away because they were a same-sex couple, Mullins and Craig filed a complaint with the Colorado Civil Rights Commission.

The commission found that the bakery had discriminated against the couple in violation of Colorado law, a decision the Colorado courts upheld.

The Supreme Court today found that members of the Commission had made statements evidencing anti-religious bias, and thus had not given a fair consideration to the bakery’s claims.

The court reversed the Masterpiece Cakeshop decision based on concerns unique to the case but reaffirmed its longstanding rule that states can prevent the harms of discrimination in the marketplace, including against LGBT people.

Then, the Court ruled in favor of baker, but didn’t address principle of whether a business can refuse to serve gay people.