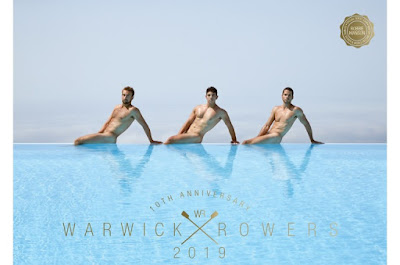 The Warwick Rowers are back, and this year they celebrate their tenth anniversary with a new calendar.

Regularly stripping off to raise funds for good causes, the team have been crowd-funding, and donating profits to fight homophobia since 2009. The first calendar came out in 2009, and raised over £100,000.

Producer Angus Malcolm and generations of male rowers at the University of Warwick Boat Club have since achieved global recognition through a fundraising initiative and public awareness campaign that delivers a range of products to around 80 countries every year and reaches more than 140 countries through its viral messaging.

The team has won a large number of awards for excellence, innovation and social impact, including twice being voted the UK Charity Calendar of the Year

The buff boys from Warwick Rowers can be found in all their glory throughout the 2019 calendar. Featuring gorgeous images every month you'll also be donating to a great cause, with 10% the publishers sales being donated to Sports Allies, a project to promote diversity and challenge homophobia in sports.

You can buy the WR2019 calendar here.