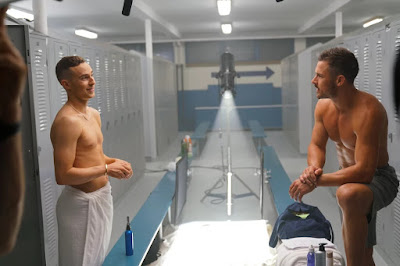 “I think there’s a little bit of taboo when it comes to men’s grooming,” said Rippon, who manscapes his entire body. “There’s a statistic* that 79 percent of men do some sort of grooming from the neck down. It’s not being talked about and I think a lot of guys don’t really know what to do. This line and this campaign will hit home and give a lot of information for guys out there.”

For Amendola, who says he grooms his body on a regular basis, grooming is an important part of his pre-game ritual. “I shave my arms and my legs. It’s not easy to play and wear these pants with the taped ankles and wrists without trimming or shaving your body. Its something that my teammates and a lot of men do, whether they play sports or if they just want to look good.”

The two seem a bit chemistry-challenged and the ad is kind of stilted, but commercials are often windows into changes in culture. And here we have an openly gay athlete comfortably discussing body shaving with a straight NFL player while both are shirtless.

It’s the underlying message that counts, dudes are dudes, no matter their sexual orientation.

Watch the ad below: