Casa Batlló, in Barcelona, beautifies with rainbow colors for Pride 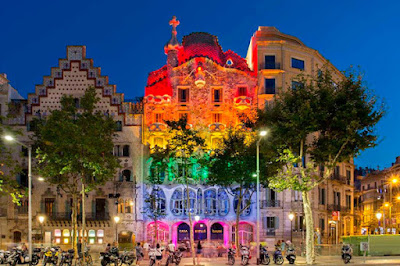 As every year, the Casa Batlló, in Barcelona (Spain), illuminates its façade with the colors of the rainbow to celebrate the International Day of LGBT Pride.

With this action, the famous modernist building, built by the universal architect Antoni Gaudi, joins the movement to defend freedom so that no one may suffer violent acts, discrimination or inequality of any kind due to their sexual orientation or gender identity.

This gesture continues with the link between Casa Batlló and the LGTB movement, since it was the first museum in the world to participate in Pride Barcelona last year, dedicated to LGBT refugees.

Pride Barcelona this year celebrates its tenth anniversary with more than 80 activities, coinciding with the 40th anniversary of the first LGBT event in Spain, which took place precisely in Barcelona.