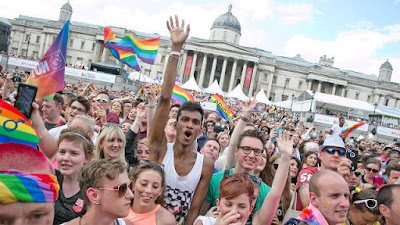 Only a few weeks away from the parade, Pride in London has released their annual TV ad. And this year it’s a queer history lesson no LGBT person or ally should ever forget.

This year’s theme for Pride in London will be Pride Jubilee, celebrating the 50th anniversary of the Stonewall riots. Half a century after that fateful night in New York City, the LGBT community in the UK reflects on the fight for equality.

From Stonewall to the AIDS crisis to the fierce battle against Section 28 up until marriage equality, Pride in London ad condenses all the pivotal moments that shaped the community. The video ends on a hopeful note, highlighting the protest element which so many Prides seem to have lost over the years.

Pride in London reflected on the milestones of the LGBT community and worked with an all-LGBT cast for the film, as well as using actual historical news audio and footage to add authenticity.

Watch the TV ad below: