Over 1,000 same-sex marriages recorded in Taiwan since the introduction of equal marriage on May 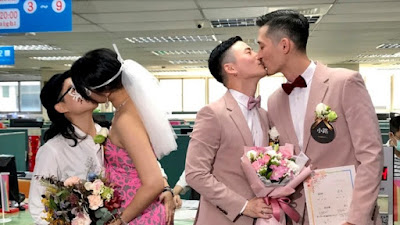 Taiwan has wed 1,173 same-sex couples since becoming the first Asian country to introduce equal marriage on May 24. In the first month of equal marriage, 790 female couples and 383 male couples tied the knot, Taiwan’s Ministry of the Interior announced.
﻿
Same-sex marriage was introduced after Tapei legislators approved a government-backed bill on May 17, almost two years to the day after the island’s Constitutional Court ruled that a law defining marriage as being between a man and a woman was unconstitutional.

The government was given a two-year deadline to extend marriage rights to same-sex couples, and in November 2018 it held a referendum on the matter. Of the 55 percent of voters who participated, 67 percent voted against marriage equality. The result however did not impact the court ruling, which was binding.

Some 526 nuptials took place on the very first day of marriage equality, May 24, which came after a three-decade fight by LGBT rights campaigners.

While marriage equality in Taiwan is undoubtedly a huge step forwards for LGBT+ rights, it is not without its limits. Under the legislation, same-sex couples may only adopt children who are biologically related to at least one of the pair. According to the Ministry of the Interior, none of the newlywed couples have filed for adoption as of yet.

Transnational couples are also limited by a stipulation that same-sex marriages are only allowed between Taiwanese people, or with foreigners whose country recognises gay unions. Since May 24, 28 such unions have been registered.

Congrats to all newlyweds!!!