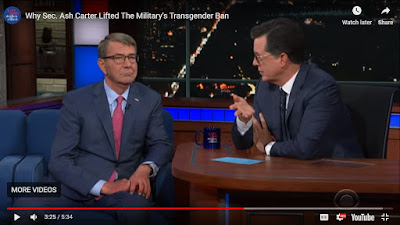 Former Defense Secretary Ash Carter explained why he believes Donald Trump’s ban on transgender people serving in the military may not last long.

Carter, who served in the Cabinet role under President Barack Obama when the ban was lifted in 2016, told “The Late Show” host Stephen Colbert that it boiled down to being able to recruit the most capable people for the all-volunteer military, regardless of their identities.

“The reason we’re the finest fighting force in the world is because we have the best people,” said Carter, who is promoting his new book “Inside the Five-Sided Box” about his three decades at the Pentagon.

Carter continued: "What matters in choosing them is military qualifications and I continue to maintain that and that is what led me to the view that we ought to admit to the military and retain in the military the people who are most qualified to do a given job."

Colbert asked Carter if he was “surprised” the lifting of the ban didn’t last long. Trump’s ban, on that basis that trans people cost the military too much, came into effect in April amid a slew of legal challenges.

“I think it’ll come back because I think it’s based upon that fundamental military necessity of qualifications are what really matter,” Carter replied.