Pride Month comes back to Chicago

The Chicago Transit Authority has again decorated several train cars on the north-south Red Line in rainbow colors for Pride Month, as it has done the past several years.

This year, for the first time, Howard Brown Health Center, which serves a largely LGBT clientele, has become a sponsor of the Pride cars, decorating the interior with visuals representing the center’s diverse patient population and highlighting that it will never deny care, judge sexuality, or define anyone by their HIV status.

Also, in the heavily gay Boystown neighborhood, the city is installing 14 Pride-themed crosswalks along North Halsted Street — 13 in rainbow colors and one in the pink, blue, and white colors of the transgender flag. Seven of them, including the trans one, have been unveiled; the rest are scheduled to be completed by June 22, in time for the Pride festival.

Last April, Chicago elected its first openly gay mayor, Lori Lightfoot, who become the leader of the third largest city in the USA. 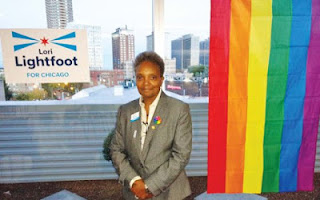 Lori Lightfoot, the mayor of Chicago