A gay love story that echoes across time 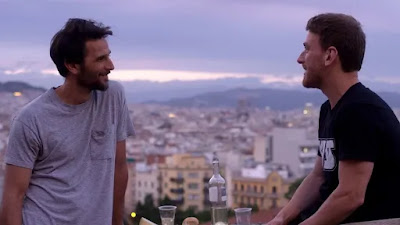 Out gay Argentine writer/director Lucio Castro’s wistful, seductive bromance End of the Century is one of the year’s best queer films. Opens Aug 16 at IFC Center in NYC and Sept 20 at the Nuart Theatre in Los Angeles.

Castro explained his deliberate approach to the storytelling: “The structure came about organically. I started with an archetypal beginning of a novel: a man arrives in town. Then I wrote it unplanned. I have this character in the city alone for 12 minutes with no dialogue. I wanted him and viewers to become aware of the city, the architecture, other people chatting, the sound and smells of the city. Once the characters start speaking, the movie has a lot of dialogue and the city becomes a background.”

The movie then flashes back 20 years earlier to show how the men first met. In this episode, Ocho arrives at his friend Sonia’s (Mía Maestro) apartment. She is dating Javi, but the guys connect when Sonia is out of town. These scenes depict the guys’ previous romantic encounter, in a time before cell phones and social media. They spend the day together, wandering through a museum, posing in front of a painting, walking around statues as they reflect on the past and how memory records it. These moments echo the present-day interactions we’ve already seen.

Both vignettes show the men falling in love. An episode of the guys dancing to “Space Age Love Song,” which segues into their first kiss, is perhaps the film’s most extraordinary scene, and not just because it is one of the only two sequences shot with a hand-held camera. It conveys the urgency and intensity of their passions and creates a connection that ripples through the years.

Castro also includes a third encounter between the guys, late in the film, that is deliberately ambiguous but also brilliant. It lets the audience decide what is real and what is imagined. This is what makes “End of the Century” so beguiling.