Cicada, a romantic drama about being queer and in love 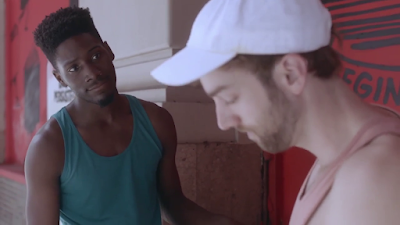 Gay romantic drama Cicada is set to be released in cinemas soon. Based on Matthew Fifer’s and Sheldon D Brown’s personal experiences, the film is a heartfelt and refreshingly hopeful tale that tackles complex subjects with grace, delicacy, and honesty.

It tells the story of New Yorker Ben, played by Matthew Fifer, who's stuck between meaningless hook-ups and awkward sessions with his therapist Sophie, played by Cobie Smulders.

Things change when he meets Sam, played by Sheldon D Brown's, a handsome stranger with whom he forms an immediate connection. As the pair while away balmy summer nights getting to know each other intimately, revealing the secrets and fragilities they must share if they are to truly let the other person in.

The film was launched in 2020 at Outfest and has also been featured at the BFI London Film Festival. Fifer and Brown were recently nominated for Best First Screenplay at the 2022 Film Independent Spirit Awards. It tackles the pain and poetry of being young, queer, troubled and in love.