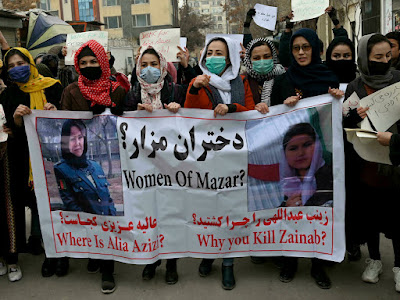 Taliban gunmen have raided the homes of women’s rights activists in Kabul, beating and arresting female campaigners in a string of actions apparently triggered by recent demonstrations.

Tamana Zaryabi Paryani and Parawana Ibrahimkhel, who participated in a series of protests held in Kabul over the last few months, were seized by armed men claiming to be from the Taliban intelligence department.

Shortly before Paryani and her sisters were detained, footage was posted on social media showing her screaming for help, saying the Taliban were banging on her door.

The women participated at several demonstrations, carrying placards demanding equal rights and shouted: “Justice!” They said they donot want to be forced to wear the hijab.

The spokesman for the Taliban-appointed police in Kabul, Gen Mobin Khan, tweeted that “insulting the religious and national values of the Afghan people is not tolerated any more." 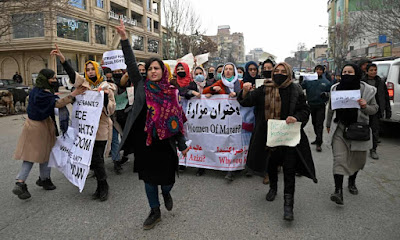 Afghan women protest for their rights