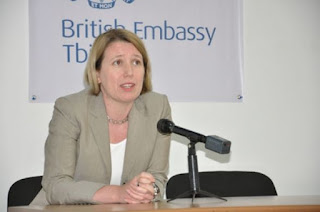 I've read a very interesting interview to Judith Gough, who became the British ambassador to Ukraine last year and previously served in South Korea and the former Soviet republic of Georgia. For her, the major problems for being lesbian and to serve in homophobic countries have not come from the host countries but from other diplomats.

“I’ve had some quite biting comments from diplomats representing other countries", she said. Those comments include: “Somebody like you shouldn’t be posted in a country like this” and “You shouldn’t be doing the job you’re doing”.

“There is a level of difficulty sometimes in dealing with other countries where they do not have the same approach to LGBT issues as we do”, she continued. “But then I’ve also had comments that ‘as an ambassador really you should be at home with your children, and not being a full-time ambassador’”, she added.

In those occasions, she responds with a couple of things: "One is: I’m here because I’m good at my job and I have the right expertise, and the second is: I represent the U.K. and we are a diverse country based on a certain set of values. I therefore reflect that country”.

Gough and her civil partner, engineer Julia Kleiousi, have two children, aged 3 and 11. The ambassador told she’s had nothing but support from the U.K. Foreign Office, which she has served since 2001, just 10 years after it opened diplomatic posts to LGBT people, once considered a security risk. “I can genuinely say that within the Foreign Office I have never experienced discrimination or harassment on the grounds of sexuality”, she said.