A new attack on LGBT event in Ukraine 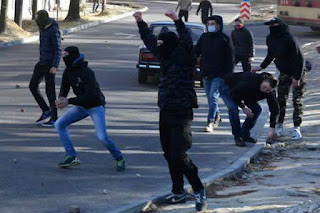 The organisers of an LGBT festival in the Ukrainian city of Lviv have been forced to call off the event as a far-right group surrounded the venue.

The equality festival was a regional branch of a Kiev event which was first held in December. It included literary readings, film screenings and public events. The planning for the event had been difficult, as the police nor the city offered support.

Around 200 far-right activists surrounded the Dnestr hotel where 70 participants of the event had taken shelter. The aggressive demonstrators surrounded the venue demanding that authorities to stop the event, and threw stones.

More police reinforcements were deployed at the hotel with authorities having forcefully canceled the event. Police later explained that they had received an anonymous bomb threat. Bomb squad units were sent to the hotel to search for the hoax explosives, while the attendees were escorted out.

As the participants of the event were being boarded into buses by the officers, the ultra-nationalist group started throwing stones and firecrackers at the attendees and attempted to break through the police lines and shouting “Kill! Kill! Kill!”

One of the orgnisers Olena Shevchenko said: “The hotel we had booked for people coming from outside Lvov told us we could not stay there”. He added: “When we arrived, the administrator told us the city authorities had told them we were perverts, they had Googled us and said people like us should burn in hell”.

The mayor of Lviv, Andriy Sadovy, wrote on Facebook but only to condemn the LGBT group, rather that offer support.