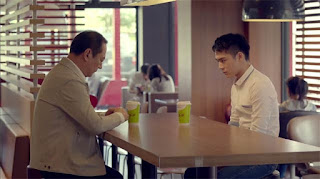 A new ad by a fast food chain in Taiwan features a young man coming out to his father by writing on a paper coffee cup.

In a McCafé, the son writes "I like boys" on his coffee cup and shows it to his father. The father sighs loudly and walks away from the table without saying a word. He returns with his own beverage in hand, and writes several words over what his son had initially written to read, "I accept that you like boys". The son tries to hold back his tears as they sip their drinks and exchange smiles of relief.

The 90-second ad is the third and latest in the More Warmth in Conversations campaign by McDonald's. Since the ad was posted on Friday evening on McDonald’s Taiwan’s Facebook page, the video has been shared more than 6,800 times and viewed 1.9 million times.

Sadly, conservative and anti-gay religious groups call for boycott of McDonald's, for them gay people should drink coffee at their closets, but Taiwan is one of Asia’s most gay-friendly territories,