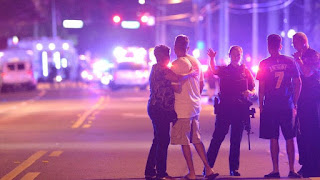 An American-born man who'd pledged allegiance to ISIS gunned down 49 people at a gay nightclub in Orlando, the deadliest mass shooting in the United States and the nation's worst terror attack since September 11.

The gunman was Omar Mateen of Fort Pierce. He called 911 around the time of the attack to pledge allegiance to ISIS and mentioned the Boston bombers, according to a U.S. official.

Mateen carried an assault rifle and a pistol into the packed Pulse club about 2 a.m. Friday and started shooting, killing 49 people and wounding at least 53.

After a standoff of about three hours, police crashed into the building with an armored vehicle and killed Mateen.

There has been no claim of responsibility for the attack on jihadi forums, but ISIS sympathizers have reacted by praising the attack on pro-Islamic State forums.

"We know enough to say this was an act of terror and act of hate", President Obama said in an address to the nation from the White House. While the violence could have hit any American community, "this is an especially heartbreaking day for our friends who are lesbian, gay, bisexual or transgender", he said.

I am absolutely appalled and I can only pray for the victims and give my full support to their families and friends, and also to the American LGBT community.