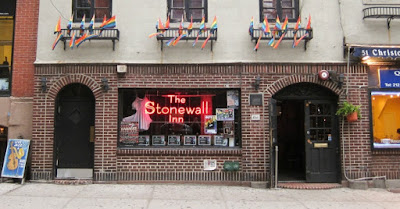 President Obama has today officially awarded National Monument status to New York’s historic Stonewall Inn, the most iconic gay bar in the world. It is the first time the status has been awarded to an LGBT venue.

The Stonewall riots were sparked in 1969 to protest police brutality and crackdowns on gay people after repeated NYPD raids of the bar. Some of the first Pride marches began on the anniversary of the riots in 1970, and in many countries Prides are still often known as ‘Christopher Street Day’ Parades in honour of the pub’s location.

In a powerful video, the President said:

Back in 1969, as a turbulent decade was winding down the Stonewall Inn was a popular gathering place for New York City’s LGBT community.
One night, police raided the bar and started arresting folks. Raids like these were nothing new, but this time the patrons had had enough.
The stood up and spoke out. Riots became protests. The protests became a movement. The movement ultimately became an integral part of America
This week I’m designating the Stonewall National Monument as the newest addition to America’s National Park System.
Stonewall will be our first national monument to tell the story of the struggle for LGBT rights.
I believe our national parks should reflect the full story of our country, the richness and diversity and uniquely American spirit that has always defined us.
That we are stronger together. That out of many, we are one.