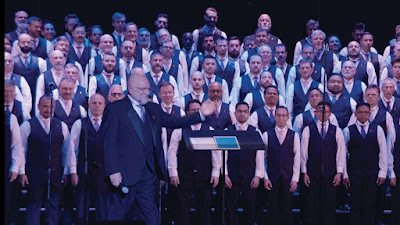 In October 2017, the San Francisco Gay Men’s Chorus celebrated its 40th season by touring for a week across America’s Bible Belt, promoting love and acceptance via concerts in states with some of the nation’s most discriminatory anti-LGBT laws.

But as depicted in the stirring, warm-hearted documentary Gay Chorus Deep South (2019), which swiftly follows chorus leader-conductor Tim Seelig and his chorale as they perform for large, enthusiastic audiences in Mississippi, Tennessee, Alabama and the Carolinas, the group’s luck held out.

Despite occasional protesters and naysayers, the chorus, which was accompanied by the largely African American Oakland Interfaith Gospel Choir, seemed successful in spreading their positive messages while singing lots of beautiful gospel and spiritual music.

A high point was when the San Francisco chorus and the Oakland choir crossed the famed Edmund Pettus Bridge in Selma, Alabama, singing We Shall Overcome. It’s a scene that resonates on so many levels.

The documentary is directed by David Charles Rodrigues, which uncovers a more personal story behind the political statement. The performances are impressive, tender and sometimes funny. Ultimately, though, the documentary is able to record only small, not sweeping, changes of heart. Nevertheless, the film, like the singers, maintains a compassionate optimism.

Watch the official trailer below: