Three women sentenced to prison for promoting unveiling in Iran 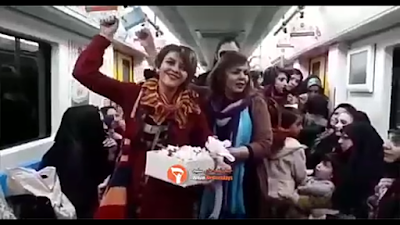 Three women held in custody in the notorious Qarchak prison for "disrespecting compulsory hijab," or the so-called Islamic dress code, were sentenced to a total of 52 years and six months.

In April 2019, Yasaman Aryani, her mother Monireh Arabshahi, and Mojgan Keshavarz were all arrested after posting a video that went viral on International Women's Day. In it, they are seen walking without headscarves through a Tehran metro train, handing flowers to female passengers.

The three women were convicted by the Tehran Revolutionary Court in the absence of their lawyers, in a direct violation of their procedural rights. In a trial that can only be described as a farce, Judge Mohammad Moghiseh sentenced each of them to 5 years in prison for «association and collusion against national security», one year in prison for «spreading propaganda against the State» and 10 years in prison for «encouraging and preparing the basis for corruption and prostitution.» In addition, Mojgan Keshavarz received an additional sentence of 7 and a half years in prison for «insulting holiness.»

We must remember women from Iran, Saudi Arabia and other Islamic countries are discriminated and treated as second-class people, and LGBT people worst.