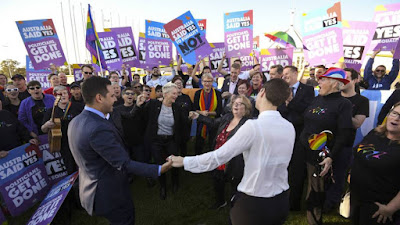 More than 6500 same-sex couples wed in Australia in 2018, the first full year after their marriages were legalised.

Out of the 119,188 couples who tied the knot in the 12-month period, same-sex marriages accounted for 5.5 per cent of those getting hitched, according to data released by the Australian Bureau of Statistics.

Amendments to the Marriage Act allowing same-sex marriage came into effect after a divisive national plebiscite and then a parliamentary vote in late 2017. The bill received royal assent on December 8, 2017.

“In 2018, same-sex marriages represented 5.5 per cent of the total number of marriages and inclusion of these marriages has influenced some key statistics,” said Mr Eynstone-Hinkins.

The law change was greeted with particular enthusiasm by lesbian couples, who represented 57.8 per cent of the same-sex pairings who walked down the aisle in 2018, compared to the 42.2 per cent who were men.

Unsurprisingly, 98.9 per cent of same-sex marriages were administered by civil celebrants. Of the 79 couples who were married by a religious celebrant, the Uniting Church accounted for 23.

“The median age at marriage recorded the greatest increase in more than a decade. This was largely because the median age of same-sex couples was considerably higher than that of opposite-sex couples,” he said. “There are couples who have been together for a decade who are marrying in their 60s and 70s and that is going to impact those statistics,” he added.

Remember the emotive video for It's Time campaign