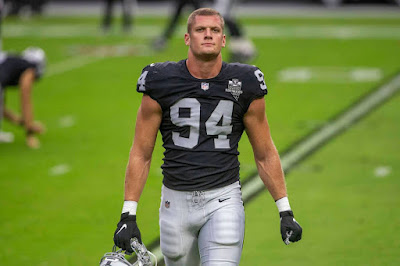 Las Vegas Raiders footballer Carl Nassib has become the first active NFL player in the US to come out as gay.

In a historic first for the game and sport in the US, Nassib opened up to his 140,000+ fans on Instagram with a simple message, “I just wanted to take a quick moment to say that I’m gay.”

Nassib, 28, is entering his sixth NFL season, his second with the Raiders after stints with the Cleveland Browns and the Tampa Bay Buccaneers and he played in college for Penn State. In March 2020, Nassib signed a three-year, $25 million contract with the Las Vegas Raiders.

No openly active gay or bi player has ever played a down in an NFL regular-season game. There have been 15 players who came out after playing, or in the case of Michael Sam in 2014, was out after being drafted but never made a roster.

The response across the board has been swift and positive with his club the Raiders tweeting a heart emoji, showing the team supports Nassib and that his announcement was not a shock. They also tweeted out, “Proud of you, Carl” from the team’s official account.