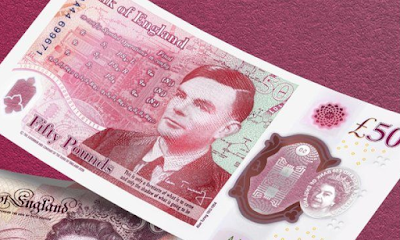 Turing worked to crack the German Enigma codes from Nazis, and is credited by many for playing a large part in ending the Second World War. Turing is also considered the father of modern mathematics and computers.

In 1952, Turing was convicted of gross indecency because of his homosexuality, pleading guilty and opting for a course of hormone treatments that effectively amounted to chemical castration rather than being imprisoned.

Turing died just two years later, at the age of 41, as a result of cyanide poisoning which ruled to be suicide. Over 60 years after, Queen Elizabeth II has granted him a posthumous pardon for "a judgment that is now considered unfair and discriminatory".

Watch 'Unveil of the Alan Turing £50 polymer banknote' by Bank of England: