Thousands protest in Basauri for the last homophobic attack in Spain 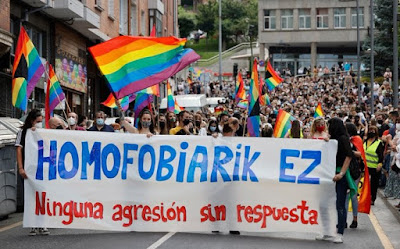 Thousands of people have demonstrated this afternoon in the streets of Basauri (Basque Country, Spain) to show their complete rejection of the homophobic aggression suffered by a 23-year-old young man last Sunday in a park in this Basque town.

His name is Ekain, and he is still recovering from the injuries caused by this homophobic aggression, a beating that 13 people gave him shouting “fucking fag”, which left him unconscious and for which ended up in the hospital.

The events, as reported by his partner Kevin, took place at dawn on June 6. They were in the Bizkotzalde Park with other colleagues when Ekain left the group and found his attackers, who began to mess with him because he is homosexual. The young man replied if that bothered them, they should leave the park, and this led one of the gang members to attack him from behind and the rest of homophobes started hitting him.

The massive protest, headed by a banner with the text "Homofobiarik ez. Ninguna agresión sin respuesta" (No aggression without response) and in which numerous rainbow flags waved, has had the participation of the victim, who has been moved by the samples of support and affection received. "I am grateful to everyone who has come to support me and the cause, and we are all in this together," he said.

The Plenary of the Bausauri City Council and the Basque Parliament have approved different statements condemning and rejecting the attack, and asking the Prosecutor's Office to act immediately for the attack on Ekain, considering that it is a clear hate crime based on sexual orientation and it cannot go unpunished. 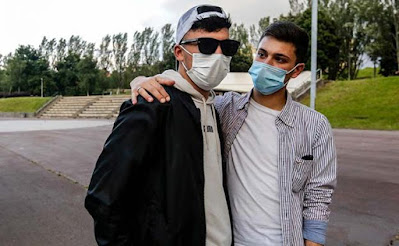 Ekain and Kevin participated in the protest