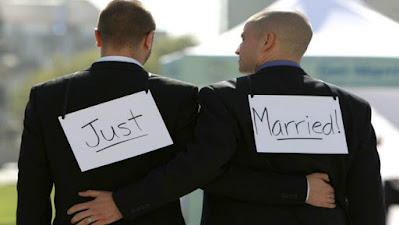 U.S. support for legal same-sex marriage continues to trend upward, now at 70%, a new high in Gallup's trend since 1996. This latest figure marks an increase of 10 percentage points since 2015, when the U.S. Supreme Court ruled that all states must recognize same-sex marriages.

Today's 70% support for same-sex marriage marks a new milestone in a trend that has pointed upward for a quarter of a century. A small minority of Americans (27%) supported legal recognition of gay and lesbian marriages in 1996, when Gallup first asked the question. But support rose steadily over time, eventually reaching the majority level for the first time in 2011.

Republicans, who have consistently been the party group least in favor of same-sex marriage, show majority support in 2021 for the first time (55%). The latest increase in support among all Americans is driven largely by changes in Republicans' views.

Democrats have consistently been among the biggest supporters of legal same-sex marriage. The current 83% among Democrats is on par with the level of support Gallup has recorded over the past few years.

As would be expected at a high-water mark in national support for same-sex marriage, all age groups are the most supportive they have been to date. Still, age differences remain, with 84% of young adults, 72% of middle-aged adults, and 60% of older adults saying they favor same-sex marriage. 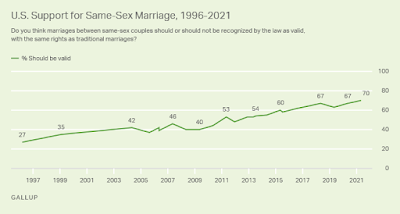