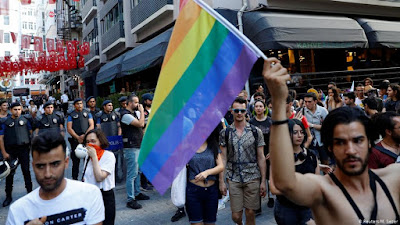 Thousands of people, many waving rainbow flags, marched in the Istanbul’s historical Beyoglu district for the Pride parade, playing cat-and-mouse in back alleys with battalions of police officers who tried to prevent them from congregating on Istiklal Avenue, a hub for shopping and tourism.

“Rainbow is not a crime, discrimination is,” the marchers chanted.

Finally, Turkish police fired tear gas to disperse the crowd that gathered in central city, detaining some of those seeking to take part in an event banned by local authorities. Some 20 people, including a photo journalist, were detained, according to media reports.

Turkish authorities have repeatedly banned Pride events in recent years. Before then, thousands of people used to take part in the parade on the Istanbul streets. Anti-LGBT speeches and social media posts by top government officials have become common.