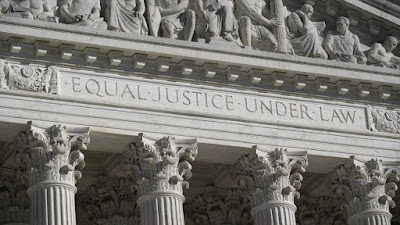 The U.S. Supreme Court declined to hear an appeal to a circuit court ruling that required a Virginia school to let a transgender student use the bathroom corresponding with his gender identity. Gavin Grimm was born female but identified as male after his freshman year in high school, legally changing his name and beginning hormone therapy.

The decision delivers a major win for Grimm as well as LGBT advocates that have decried bathroom bans and other anti-trans policies that have sprung up across the U.S. this year, many of which target trans youth.

The principal of Virgina school at first gave him permission to use the boys' bathroom, but the school board later adopted a policy saying restrooms were limited to the corresponding biological genders.

Grimm originally went to court in 2015, arguing that the school board's policy made him feel ashamed and isolated, and the 4th U.S. Circuit Court of Appeals, based in Richmond, ruled in his favor. The ruling cited an Obama-era Education Department letter that said a school generally must treat transgender students consistent with their gender identity and refusing to let students use bathrooms corresponding to their gender identity would violate the federal law.

Lawyers representing Grimm, told Suprem Court that treating him differently by requiring him to use separate single-stall bathrooms singled him out and stigmatized him as unfit to use the same restroom as his peers. Its order denying review in the case means Grimm's victory in the appeals court remains intact.

Now, courts across the country will take note of Gavin Grimm’s decision, and decisions in appellate and district courts around the country that have consistently ruled in favor of transgender students.

The U.S. Supreme Court ruled in favor of same-sex marriage in 2015, and it has upheld the right for LGBT people to live and work without fear of harassment, exclusion, and discrimination, and LGBT students have the same rights and deserve the same protections. 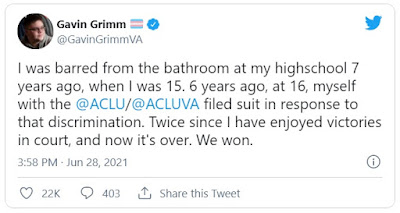