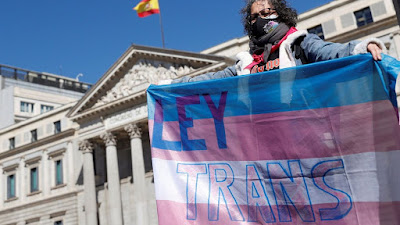 The Spanish government approved the draft of a bill to allow anyone over the age of 14 to change gender legally without a medical diagnosis or hormone therapy.

The draft bill, which will go to a public hearing before another reading in the cabinet and a vote in the lower house of parliament, removes the requirement for two years of hormone therapy and a psychological assessment to switch gender in official records.

If approved, trans people will be able to declare their gender by filling in a form at a registry office and then confirming the decision three months later.

This legal reform puts Spain at the centre of Europe's debate about the rights of LGBT people, but activists and families of transgender children say the draft bill does not go far enough, while some feminist associations oppose it.

With the draft bill, which also bans LGBT conversion therapies, Spain is set to join two dozen countries aiming to decouple gender choice from medical procedures and would become the largest European country to introduce self-identification. Same-sex marriage is legal in Spain since 2005.