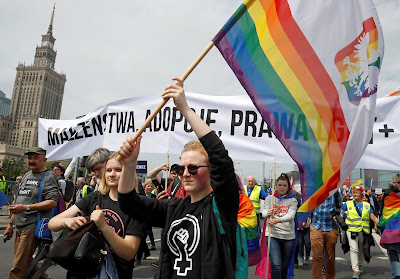 The council’s Congress of Local and Regional Authorities gathered to adopt a resolution condemning the rising anti-LGBT hate speech and discrimination sweeping across Poland. It included a recommendation that central governments develop national action plans reinforcing anti-discriminatory and human rights measures, with a particular focus on LGBT people.

Rapporteur Andrew Boff said: “Across Europe, the rights and recognition of LGBT people are under pressure. Rising hate speech is creating divisions between the citizens of our towns and regions. Against this, local and regional authorities must strengthen the social rights and well-being of their LGBT citizens and promote dialogue. We have a duty to all our fellow citizens to create inclusive societies.”

Since 2019, more than 90 Polish towns and regions had passed resolutions declaring themselves free from so-called “LGBT-ideology”. These “LGBT-free zones” now cover more than a third of the country, their homophobic rhetoric reinforced by the governing Law and Justice party, which has repeatedly positioned LGBT people as a corrosive threat to so-called traditional values.

Rising conservative and fundamentalist voices in Europe are increasingly politicising the issue of LGBT identity and designating LGBT people as scapegoats, questioning diversity in general, and LGBT people’s human rights and the legitimacy of their identity, in particular.

The EU has also moved to condemn Poland’s growing anti-LGBT sentiment. In December 2019 the European Parliament passed a resolution against public discrimination and hate speech, and encouraged funding to be withdrawn from nations that infringe this. 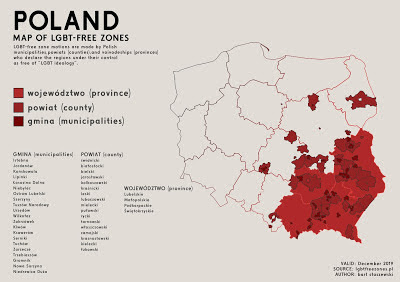 Map of LGBT-free zones in Poland
Publicat per Ben Aquila a 1:59 AM