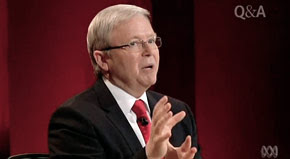 Only days out from elections, Australian Prime Minister, Kevin Rudd, gave a staunch defence of same-sex marriage when challenged by a pastor on TV.

When pastor Matt Prater quoted the Bible as stating same-sex marriage was clearly wrong in the eyes of God, Rudd replied: "People don't choose their sexuality, they are born that way". And he said: "The Bible is about universal love, and loving your fellow man".

PM also said: "If you think homosexuality is an unnatural condition, then frankly I cannot agree with you based on any element of the science". And he added: "If you accept it to be natural and normal to be gay then it follows it is not right for two folk who love each other to be denied marriage".

Kevin Rudd announced last May that he had reconsidered his initial opposition to same-sex marriage, and he promised to hold a Parliamentary vote on allowing gay couples to marry within 100 days if his centre-left Labor Party wins the next Australian elections.