Gambia President Considers Gays One of the Biggest Threats to Humanity 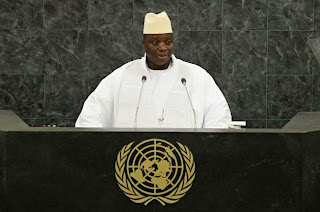 Yahya Jammeh, the president of Gambia, denounced gays and lesbians at the United Nations today.

He used his address to the United Nations General Assembly to attack gay people, calling homosexuality one of the three “biggest threats to human existence”.

Jammeh said homosexuality, greed and obsession with world domination, "are more deadly than all natural disasters put together".

Gambian president is notoriously antigay. In 2008 he gave an ultimatum to the gay and lesbian residents of Gambia, telling them to either leave the country or face execution by beheading.

In the last decade, homophobic attacks and harassment are becoming more visible specially in sub-Saharan Africa. Currently, homosexuality is punished in 36 African countries.