Gay Kisses as Protest in the Italian Parliament 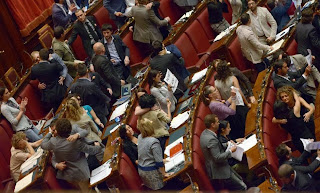 The Italian Parliament's lower house approved the controversy bill on homophobia, with votes of the Democratic Party, Choice Civic League and some individual MPs of the PDL, and the strong opposition of M5S Movement.

As initially conceived, the measure increased the penalty for crimes of homophobia and transphobia by half, and it had the support of M5S Movement.

But finally, the bill has been approved with an amendment which excludes the aggravating circumstance of homophobia for the opinions or conduct "undertaken within political organizations or trade union, cultural, health, education, religion or worship". That amendment has been interpreted by many as an attempt to remove the aggravating for the extreme right-wing political associations or Catholic reactionary.

When voting began, the protest of M5S Movement was very singular: each of its parliamentary hugged or kissed one of his or her same-sex colleague.

Now, the bill goes to Italian Senate for a second reading, where it can be amended again, but it will probably be refused by members of Silvio Berlusconi's People of Freedom party, because they say that the future law will restrict freedom of speech.