I Want to Marry You in Minneapolis! 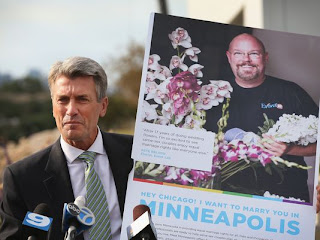 Hey Chicago! I want to marry you in Minneapolis, is part of the new ad campaign in Chicago newspapers, impulsed by Minneapolis Mayor R.T. Rybak.

With an eye on boosting tourism, the Minneapolis Mayor visited a predominantly gay Chicago neighborhood to urge same-sex couples to tie the knot in Minnesota under his state's new gay-marriage law. Remember that same-sex marriage has been legal in Minnesota since Aug. 1.

Rybak said: "You could fly to Minneapolis today and by the afternoon you would be eligible for 111 federal legal advantages". And he added: "If all you did was file a joint tax return, you could save the cost for not only you, but your whole wedding party".

It's obvious that Mayor Rybak is inviting gay couples (and their money) to Minneapolis.

In any case, Rybak's message could bolster efforts of Illinois' gay marriage proponents, who are smarting after legislation passed in the Senate was not called to the floor of the House due to lack of support last June.