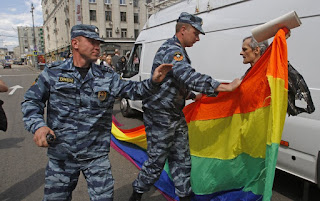 An LGBT pride event in the Arctic Circle, in the town of Salekhard, Russia, has been banned due to the “gay propaganda law", signed by President Vladimir Putin in 2013.

Police have banned around 300 people who were looking to march in what was named Polar Pride.

The city administration cited the so-called gay propaganda law, which bans providing information about homosexuality to minors. They claimed the march would be harmful to children’s “health and development”.

The same law was used to ban gay pride march in Moscow in 2012. Moscow Pride began having marches in 2006 and continued through 2011, in spite of repeated homophobic attacks against demonstrators.

After approving law, pride parades have been denied across Russia, in many cities as Arkhangelsk, Yekaterinburg, Cheylabinsk, Sarank, St Petersburg, Tula, Tver and Vladimir.