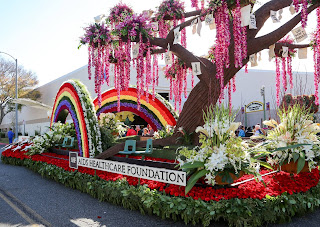 Survivors of the Pulse massacre took center stage at the 128th Rose Parade in Pasadena, California. It's a celebration more than a century old to salute the world on the first day of the year.

The Rose Parade is watched in person by hundreds of thousands of spectators on the parade route, and is broadcast on multiple television networks in the United States.

The 2017 parade featured 44 floats, 19 equestrian units with approximately 400 horses, and 22 marching bands. The Grand Marshals of the parade were Greg Louganis, Janet Evans and Allyson Felix.

Victor Baez Febo and Isaiah Henderson, with survivor Jahqui Sevilla and Pulse’s owner Barbara Poma, rode on a float commissioned by the AIDS Healthcare Foundation and Impulse Group United, which honored the 49 victims and dozens of survivors of last year’s shooting at the Pulse Nightclub.

Last November, more than 150,000 people attended the Orlando’s annual Come Out With Pride parade, one of the largest Pride festivals in Florida, and remembered victims just one year after of the massacre.