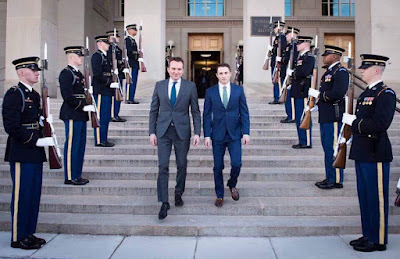 First openly gay Secretary of Army bids farewell to the Pentagon. Eric Fanning served only 248 days as US Secretary of the Army, but it was long enough to make history.

Fanning, the first openly gay service chief in US history, was given an emotional farewell ceremony at the Pentagon.

‘It’s been the honor of my lifetime to be your secretary’, Fanning told the audience of top Army and Defense Department leaders in a packed Pentagon auditorium.

Fanning’s partner, Benjamin Masri-Cohen, posted a photo on Facebook today of he and Fanning exiting the Pentagon after a very emotional farewell. ‘While sad, I was so proud of what Eric and his team accomplished and honored to have been by his side for the adventure’, Masri-Cohen wrote.

The US Senate confirmed Eric Fanning last May 2016 as the new Secretary of the Army. He was confirmed unanimously on a voice vote. Fanning had a long record of national security service in the military and Congress which dates back more than two decades.