Roy Cooper sworn in as Governor of North Carolina 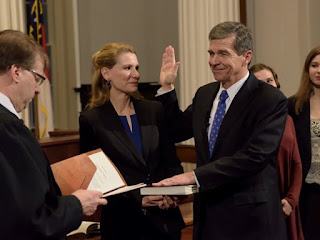 The new North Carolina Gov. Roy Cooper took his oath of office minutes after midnight Sunday morning, getting an early start on his duties amid bitter partisan politics in the state but saying he believed there is a way forward.

Cooper claimed victory on election night. But it was another four weeks before McCrory conceded while dozens of ballot protests were considered and a partial recount was held in Durham County. In the end, Cooper won by about 10,000 votes.

A law McCrory signed last March limiting non-discrimination protections for LGBT people and directing which public bathrooms transgender people can use was a big issue in the fall campaign. Cooper wants the law known as House Bill 2 repealed.