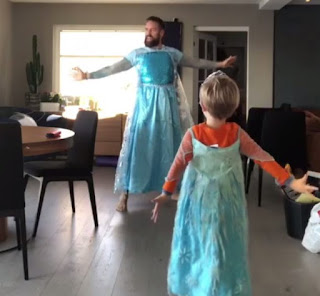 A dad from Norway made his son’s day when he dressed up like Elsa from Frozen and danced together to Let It Go around their living room.

Ørjan Burøe said his 4-year-old son named Dexter loves Frozen, and when he told he wanted to dress up and dance like Elsa, the dad bought two costumes so he and his son could play dress-up together.

Ørjan filmed their dance to Let It Go, and he hopes the video teaches a valuable lesson: “It’s important to embarrass yourself and let it go,” he said.

The dad said he likes to post family videos on social media because “a lot of people use social media in a negative way … I think it’s more important to give them something to make it happy.”

Ørjan said his son is drawn to Frozen because Elsa is a strong character and kids don’t judge by gender. “Just like kids don’t see color of skin. He just sees something that’s great. For him, Elsa is a superhero.”

He wanted Dexter to feel free. “It’s important to teach children that you can do whatever you want to do, and not put prejudice all over them. Soon enough he will find out who he's going to be in life,” he added.

Now, video of the epic dance has gone viral, putting a smile on millions of people’s faces around the world, and teaching how parents can do an inclusive approach to parenting.

Watch the video below, it is amazing!!!