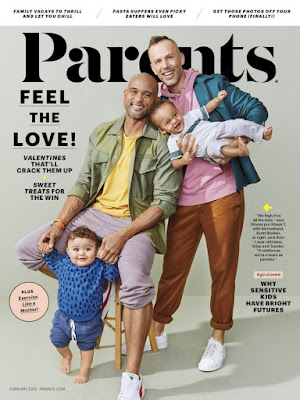 US publication Parents posted a photo of its February front cover, featuring a same-sex couple for the first time since it was established in 1926. It shows fitness motivational speaker Shaun T and his husband Scott Blokker with their twins. The magazine is also running a feature piece about their many attempts to have kids through surrogates.

The issue stars Shaun T, the creator of the home fitness series Insanity, T25, and Hip-Hop Abs, along with Scott Blokker, his husband of six years, and their cute 1-year-old twin sons, Silas Rhys and Sander Vaughn, who were born through surrogacy.

The couple told Parents about the difficulties of caring for premature babies (born at 32 weeks) and how their marriage changed as a result. “It was terrible,” Shaun T told Parents. “We got into more fights than we’d ever had in our entire relationship.”

“I even questioned whether we’d ruined our marriage by having kids, but it wasn’t the kids. It was the not sleeping!”, said Scott. After the newborn period, the couple developed their respective roles. Scott added: “I do all the planning, babysitters, shopping, doctors, and Shaun brings the fun."

The  couple grew stronger. “The connectedness you feel at the end of the day is the driving force for how you wake up the next day, so every night we fall asleep holding hands,” said Shaun T.

Congrats to the magazine and to the awesome couple! 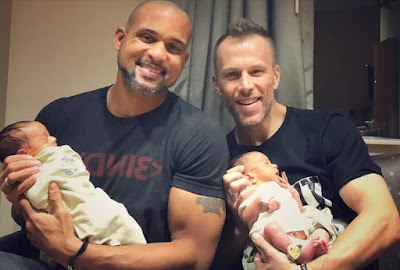 Shaun T and Scott with their premature twin sons,
one year ago