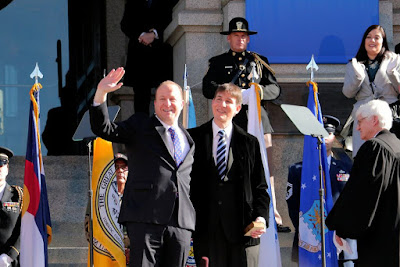 “Our mission now is to make Colorado a place for all families to have a chance to thrive today, tomorrow and for generations to come,” he said after taking the oath of office. “I believe there is nothing that Colorado needs to do that Colorodans can’t get done. There is nothing wrong with Colorado that what is right with Colorado can’t fix.”

Polis’ longtime partner, Marlon Reis, and their two children stood with him for the ceremony on the west steps of the Colorado Capitol. He took the oath at precisely noon, his left hand on a siddur, a Jewish prayer book.

In his first speech as governor, Polis celebrated the diversity of the state and recognized the historic moment: Polis is the first openly gay governor ever elected to lead a state. He is also Colorado’s first Jewish governor.

“I am very conscious of the fact that there were many brave people over the years who made it possible for someone like me to be standing here giving a speech like this,” he said. “I am grateful and forever indebted to those who came before me — who struggled for equal rights, who stepped up for public service in all its forms, who made difficult sacrifices and worked faithfully toward a brighter future for our state, our nation and our world.”