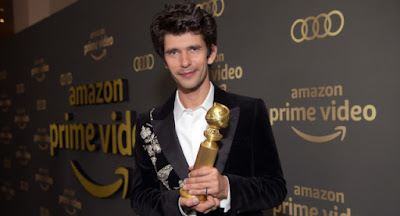 Ben Whishaw was talking backstage after winning the Golden Globe for best supporting actor in a TV miniseries for BBC’s A Very English Scandal. He says he has no problem with straight actors playing gay characters, so long as a similar range of opportunity is provided for openly LGBT performers, too.

The actor has never been one to play it safe, tackling a variety of roles since confirming he identifies as gay in 2013. At the Golden Globes, Whishaw was asked about The Assassination of Gianni Versace: American Crime Story star Darren Criss, who recently pledged to steer clear of queer roles in hopes of creating more opportunities for LGBT actors in Hollywood.

Whishaw, however, told reporters he believes skilled actors should be able to inhabit characters from all walks of life, regardless of their sexuality.

“I really believe that actors can embody and portray anything and we shouldn’t be defined only by what we are,” he said, as seen in the video above. “I think there was a time when we didn’t know anything about actors, they were very mysterious. But now we know everything.”

Still, Whishaw said he thinks there’s room for improvement in film and television when it comes to making room for LGBT artists. “I think there needs to be greater equality,” he said. “I would like to see more gay actors playing straight roles. It needs to be an even playing field for everybody, that would be my ideal.”

Whishaw, who has been married to Australian composer Mark Bradshaw since 2012, nabbed a 2019 Golden Globe for his portrayal of Norman Scott, the ex-lover of British politician Jeremy Thorpe, in A Very English Scandal, based on a real-life 1979 case.