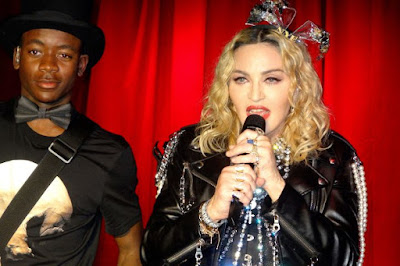 The Queen of Pop, Madonna, surprised crowds at New York’s iconic Stonewall Inn on New Year’s Eve. Stonewall was the site of the historic riots in 1969, which triggered the LGBT rights movement around the world.

She delivered an impassioned speech about LGBT and promoting tolerance:

I stand here proudly at the place where pride began, the legendary Stonewall Inn, on the birth of a new year. We come together tonight to celebrate 50 years of revolution,’ she told the excited crowd.

Let’s never forget the Stonewall Riots and those who stood up and said, 'Enough'. Half a century later, Stonewall has become a defining moment and a critical point in history.

If we truly took the time to get to know one another we would find that we all bleed the same color and we all need to love and be loved.

Let’s remember who and what we are fighting for ourselves, for each other, but truly and most importantly, what are we fighting for?

Let’s take a minute to reflect on how we can bring more love and peace into 2019, let’s look at how we can bring random acts of kindness. Maybe we can find an opening to bring the light in. Are you ready to do that?

Following her speech she launched into an acoustic set of Like a Prayer, accompanied on guitar by her son David. Clearly enjoying her time onstage, Madonna chatted to the crowd after the song. She eventually decided to perform another unplanned song, an acapella version of Elvis Presley’s song, Can’t Help Falling in Love.

Watch the exciting moment below: