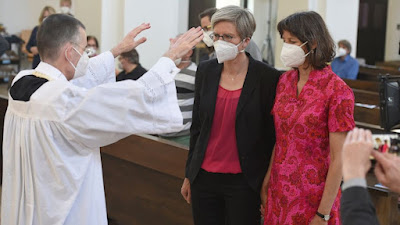 The Anglican Church in Wales has voted to allow same-sex couples to be blessed in its churches, although same-sex marriages will still not be allowed.

The bill to allow the blessings and declaring it “pastorally unsustainable” to ban them was introduced by the church’s bench of bishops, and went to a vote by the church’s governing body.

All three orders of the church’s governing body passed the bill: the bishops voted unanimously, the clergy passed it by 28 to 12, with two abstentions, and the laity passed it by 49 to 10, with one abstention.

The bill will introduce blessings “experimentally” for five years, and individual clergy are free to decide whether or not to take part in the services.

The move puts the Welsh church at odds with the Church of England, which does not recognise same-sex marriage, nor does it bless same-sex couples, and it only allows clergy in same-sex couples to minister if they remain celibate.

Remember that same-sex marriage is legal in England and Wales since 2013.