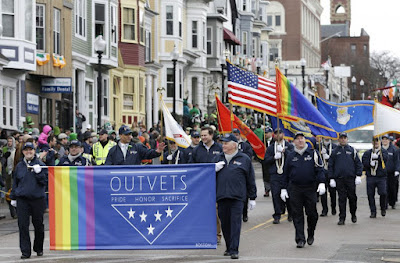 LGBT veterans who were kicked out of the military under the 'Don’t Ask, Don’t Tell' policy of the 1990s and 2000s will now be eligible for government benefits, the Department of Veterans Affairs (DVA) announced.

The statement comes on the 10th anniversary of the repeal of the controversial 1993 policy, which banned LGBT service members who were open about their sexual orientation from serving in the military.

'Don’t Ask, Don’t Tell' policy forced about 14,000 service members out of the military during the 17 years that the policy was in place. Those troops were given other-than-honorable discharges, making them ineligible for many DVA benefits, including health care, disability compensation, home loans and burial benefits.

Although DVA recognizes that the trauma caused by the military’s decades-long policy of discrimination against LGBT people cannot be undone in a few short months, the Biden administration and Secretary McDonough are taking the steps necessary to begin addressing the pain that such policies have created.

This historic move ends an unjust practice and creates a smoother pathway for life-saving benefits like healthcare, pensions, and housing assistance to finally go to the LGBT service members, who were discharged only because of who they are.