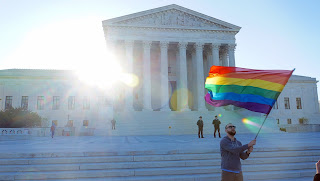 Sixty-four percent of U.S. adults say same-sex marriage should be recognized by the law as valid. Although not meaningfully different from the 61% last year, this is the highest percentage to date and continues the generally steady rise since Gallup's trend began in 1996.

The latest update, from Gallup's annual Values and Beliefs poll conducted May 3-7, comes nearly two years after the Supreme Court ruled that states could not prohibit same-sex marriage.

Since then, debates about same-sex marriage have faded somewhat from public discourse as LGBT rights advocates have focused on other issues, such as transgender bathroom access.

Americans' support for same-sex marriage has more than doubled since Gallup first polled on the issue in 1996, when 27% said it should be recognized as valid by the law.

Over the past two decades, Democrats have almost always been the political group most likely to say gay marriages should be legally recognized.

U.S. Protestants, including all non-Catholic Christians, are now about twice as likely to support gay marriage as they were in 1996 (55% vs. 27%). Meanwhile, a majority of U.S. Catholics have consistently supported same-sex marriage since 2011, which is at odds with the Roman Catholic Church's official position opposing same-sex marriage. 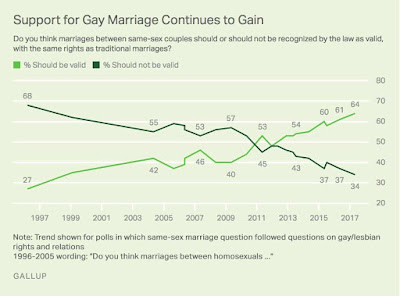 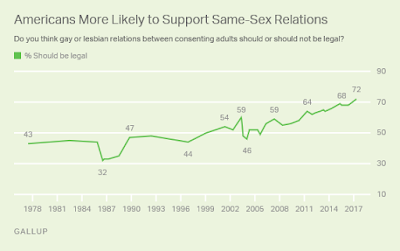