Starman from heaven by Elliot Kershaw 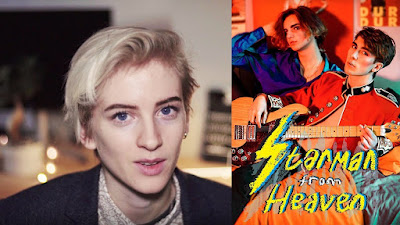 I am glad to post about a gay award winning film made by Elliot Kershaw, a brilliant young filmmaker from Brighton (UK).

Starman from Heaven is a romantic drama about Eddie, a talented singer and songwriter, who is struggling to come to terms with his future career as well as his sexuality.

Eddie (James Lye) lives in Brighton and with the help of a local singer called Harvey (Milo Wilson), gains the confidence to pursue his career in music.

This is Elliot's first live action short film, which was made with next to no budget. In fact, Elliot was the director, producer, costume designer, hair, make-up, camera and editor. The short film won the Award for Outstanding Performance in BTEC Film production.

This is the first film but will not be the last, because Elliot has a lot of talent and manages all movie techniques with accomplishment. Looking forward to the next film.

Watch the awesome short movie below: