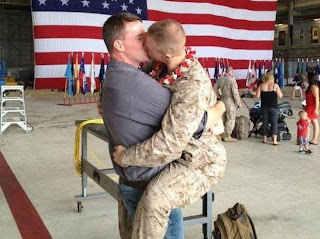 Do you remember this passionate kiss? They were U.S. Marine Sgt. Brandon Morgan and his boyfriend Dalan Wells, in February 2012, when Stg. Morgan returned home to Hawaii after a one year tour in Afghanistan.

The homecoming kiss was seen around the world by Internet and the couple became famous. That reunion published after the U.S. military’s “don't ask, don't tell” policy was expired some months before.

Yesterday, more than a year after that heartwarming scene, Brandon surprised Dalan and proposed him to get married. Brandon, on bended knee, said: "With the repeal of DOMA or not, will you do me the honor of spending your life with me?" And Dalan answered: "Yes, of course".

Although they recorded it on camera, the image and sound aren't good. In any case, a charming moment and important step for this couple.

Congrats and best wishes to them!