Marcel is not alone!

Some days ago, I posted about the case of Marcel Neergaard, 11-year-old from Tennessee, who had to leave public school and to be home-school because he had endured so much bullying for identifying as gay.

Marcel wrote a petition asking to StudentsFirst to withdraw their award to John Ragan as educational "Reformer of the Year, because Ragan, the Oak Ridge's representative, introduced a new version of the Classroom Protection Act, the bill was known as the "don't say gay", just more homophobic.

Today, Michelle Rhee, Founder and CEO of StudentsFirst, has anounced the following:

Marcel Neergaard is not alone. He and his family decided they would home-school this year, afraid of what would happen to the 11-year-old boy if he continued to be bullied at school for being openly gay. He's a brave boy and is showing tremendous courage by sharing his story.

There are students and families both in his state, Tennessee, and across the country in similar situations, concerned about whether their kids' schools are safe environments. I have two daughters of my own and worry every day about whether they are learning in a nurturing and secure environment.

Protecting our children is a top priority. Without safe learning environments, children can not realize their full potential. At StudentsFirst we believe that strongly, which is why, today, we stand with Marcel in support of the federal Safe Schools Improvement Act and the Student Non-Discrimination Act and will support similar measures in our active states. We encourage legislators across the country to support these measures to protect kids from bullying and discrimination as well.

Regardless of when Representative Ragan was named a "Reformer of the Year" by our organization, his introduction of ill-conceived and harmful legislation including HB 1332 -- which would have cultivated a culture of bullying -- does not represent the type of leadership we look for in our legislative champions. We have made that clear to Rep. Ragan and rescinded the recognition.

After this great news, I've just received the following e-mail from Neergaards family, as one of the 53.000 supporters who signed his petition:

"I thank all fifty-three thousond of you for helping me change StudentsFirst's mind on all of this. Michelle Rhee anonced that "I stand with Marcel" and that "Marcel has a lot of courage." She has recinded her award, and announced that she would support a number of anti bullying legislasion. I owe this victory to you. It took every and each one of your signatures to get to this point. You got me from a nobody to being on Facebook, Huffingtonpost, Youtube, Fifty Thousand signatures on a petition, an blogs everywere. Thank you, all of you.

Thank you so much from all the Neergaards, especially Marcel" 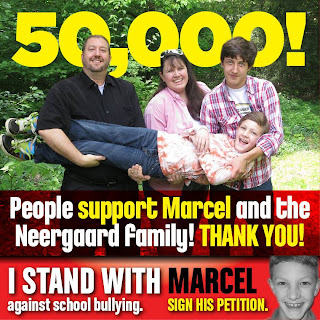